DALLAS, May 1, 2019 /PRNewswire/ — Workers under 30 are more likely to consider suicide than any other age group, according to David Michel, CEO of Catapult Health.  An analysis of more than 157,000 patient records by Catapult Health found that millennial workers are five times more likely to consider suicide than are boomers. The study included data from checkups conducted by Catapult in workplace settings in 44 states. 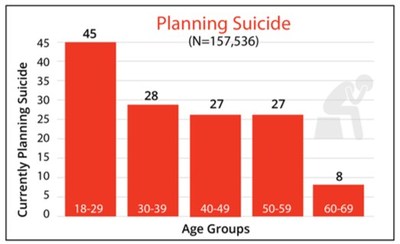 “The numbers may seem small,” said Mr. Michel, “but if your company has 5,000 employees, that means that at any given moment four of them are probably seriously considering suicide, and the number is higher if you employ more younger workers.”

The analysis also found that workers under 30 are significantly more likely to suffer from depression than their older counterparts. Depression affected 4.8% of millennials tracked in the data, compared to 1.7% of the boomers.

“It is imperative that employers help their employees recognize depression and provide the resources to overcome it,” Michel concluded.

Data in the analysis are taken from profiles Catapult Health captures of employees working at companies nationwide.  The profiles include both physical and mental health indicators and provide insight into the current well-being of American workers. For a copy of the report or for more information about Catapult Health, access www.CatapultHealth.com.

Catapult Health conducts preventive care checkups at the workplace using both onsite and telehealth resources. Patients receive their blood chemistry, depression screening and other test results in real time, in consultation with a board-certified Nurse Practitioner.