MAHWAH, N.J., May 20, 2019 /PRNewswire/ — Stryker’s Joint Replacement Division announced its continued commitment to helping America’s bravest readjust to civilian life by hosting the K9s For Warriors organization for a special celebration at Stryker’s Headquarters in Mahwah, New Jersey. May marks National Arthritis Awareness month, and Stryker’s dedication to healthcare goes beyond joint health. In honor of National Military Appreciation Month, which is also this month, Stryker is supporting mental health services for U.S. veterans by donating five service dogs to K9s For Warriors. 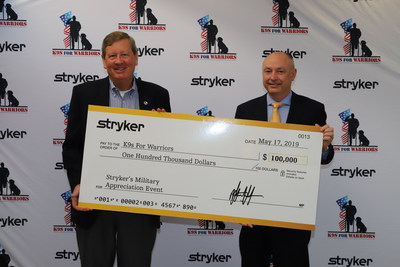 K9s For Warriors is a nonprofit organization that rescues and trains service dogs, then matches them with veterans living with trauma as a result of military service post-9/11. Stryker made its first donation to K9s For Warriors in 2015 and since then has sponsored 29 service dogs to date – the largest number of dog donations from any organization.

“Stryker has a long history of supporting our nation’s military and seeks to partner with organizations with similar values,” said Stuart Simpson, President, Stryker’s Joint Replacement Division. “Our relationship with K9s For Warriors is truly special because, together, we help our veterans regain confidence and the feeling of independence through service dogs.”

To celebrate this announcement, Stryker’s Veterans Association hosted a private screening of 4-time Emmy Award-winning documentary, A New Leash On Life: The K9s For Warriors Story (available on Amazon Prime Video) at Stryker’s Mahwah campus. The documentary features three K9s For Warriors veteran graduates. It thoughtfully depicts the events leading to their military-related trauma and how their service dogs aid in their reintegration to everyday life.

A highlight of the event was having the heroes and stars of the documentary –  Shilo Schluterman, Adam LeGrand, Louie Belluomini and their service dogs – in attendance as guests of honor. The veterans discussed the impact their service dogs have had on their lives with the Stryker community and members of the media.

“I know the value of support once a servicemember returns home,” said Bill Robison, Marine Veteran and President, Stryker’s Veteran Association. “I’m very proud to be part of an organization that prioritizes giving back to those who sacrificed so much for our country.”

“Thanks to Stryker, we will be able to make a difference in the lives of five deserving veterans,” said Rory Diamond, Chief Executive Officer of K9s For Warriors. “We are incredibly grateful for their support through the years and look forward to our continued partnership.”

About Stryker
Stryker is one of the world’s leading medical technology companies and, together with its customers, is driven to make healthcare better. The company offers innovative products and services in Orthopaedics, Medical and Surgical, and Neurotechnology and Spine that help improve patient and hospital outcomes. More information is available at www.stryker.com.

About K9s For Warriors
K9s For Warriors is the nation’s largest provider of service dogs to military veterans suffering from Post-Traumatic Stress Disorder (PTSD), Traumatic Brain Injury (TBI), and/or Military Sexual Trauma (MST) as a result of military service post-9/11. The service dog program is unique and offers an innovative approach to recovering from the invisible wounds of war. Two lives are transformed with each pairing. The veteran reduces his/her risk of suicide while the rescue dog receives a newfound purpose. 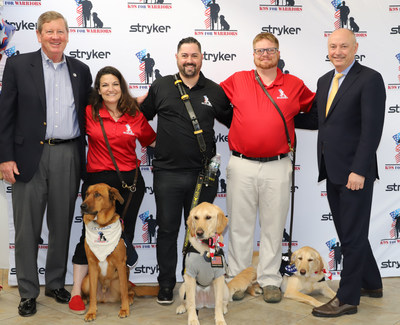 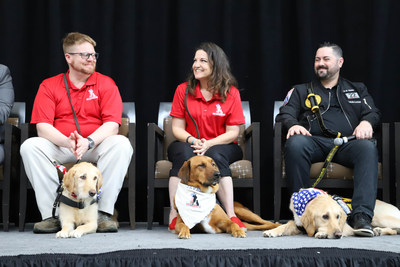 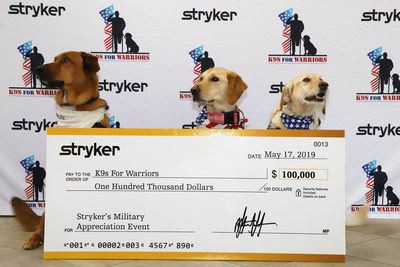